The 2nd Generation: More on the 50-Year Church Building Story of the McKnight Group

The 2nd Generation: More on the 50-Year Church Building Story of the McKnight Group

September 1970, fifty years ago this month, is when Homer McKnight launched The McKnight Group. As we commemorate our 50th anniversary, we present more about the company’s history through a limited-edition church building podcast. In the episode of the podcast titled “Pathways,” we learn about the second generation of church building leaders at The McKnight Group, starting with current President David McKnight.

Getting an Early Church Building Start at the McKnight Group 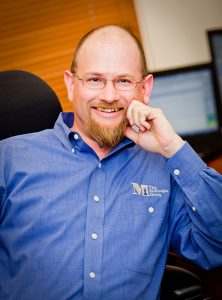 In the episode, David tells the story of how he first began working on church building projects during summer break in high school—and how no one liked him because, in his words, “I was the owner’s son and a teenager who didn’t know anything.” Fortunately, he experienced a lot, doing everything from foundations to roofing, and pushing the broom (because construction sites always need to be carefully cleaned).

During college, David got into radio and television, and thought he would pursue that career—but, as he says, “something wasn’t sitting right” with the idea. As he mulled it over, he realized that what he really wanted to do was ask his father if he could major in business and come work for The McKnight Group full-time. Homer McKnight was enthusiastic about the idea, so David finished his degree and entered The McKnight Group office.

As David recounts in the podcast, the shift from field to office took a while. He had a lot to learn about the church building construction process from the office and management side. Fortunately, as David notes, “My dad, the way he teaches is by example, so I was just spending a lot of time with him, learning how to handle situations, different issues that come up, how to plan, how to do all that.”

Eventually, David realized that his father “could do only so much himself. [But] the way God wired me is I’m an organizational person. I can see organization and put things into categories and put things into processes.” He began to create systems and processes for all aspects of the church building projects and worked with church leaders to think about their own processes and how those would impact church design and construction.

Recognizing How God Uses Everything in Our Lives

David’s college days spent studying radio and television didn’t go to waste either. As he began consulting with churches on their multi-ministry buildings, he recognized how all his understanding of audio, video, and lighting systems would come in very handy in the church design process. In the podcast, he shares stories of how his personal volunteer work with his church, building Easter and Christmas program sets and serving as lighting director, taught him even more about what churches need for effective audiovisual church design.

Listen to the full podcast to learn about an influential book and how it led David to dive into leadership development, personal development, going to conferences, talking with other people to understand the ins and outs of leadership, and more.